The Quintessential Instruction Manual on “How to Babysit a Grandpa”

How To Babysit A Grandpa

You better check your local library or run out and buy it now, the picture book “How to Babysit a Grandpa” written by Jean Reagan and illustrated by Lee Wildish, published by Alfred A. Knopf. It contains all sorts of valuable tips on everything from  “What to Feed a Grandpa” to “How to Wake Up Your Grandpa” if he happens to drift off while you are tending him. My favorite illustration is the one where the boy sings “On Top of Old Smokey” first very softly, and then gets louder and louder. I can feel the cat claws digging into the Grandpa’s bald head. That could wake up any Grandpa. 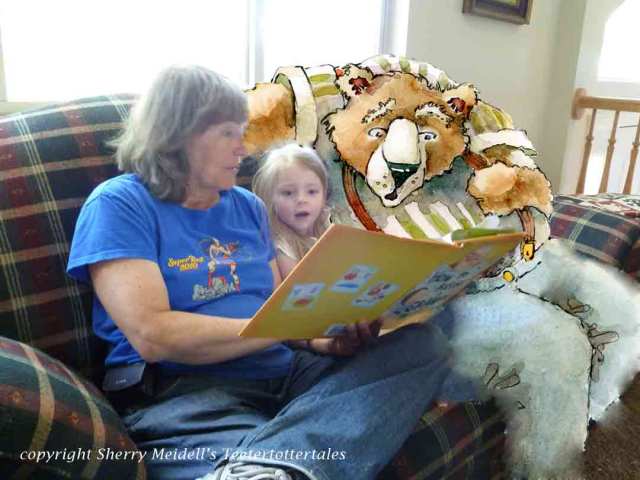 Bailey gets into “How To Baby Sit A Grandpa”

I got in touch with Jean Reagan who is somewhere out in some wilderness taking courses on how to rescue people and be a good park ranger. Now that would be fun. I had to follow the tracks through the forest and waaaalaw’ (which is french for “Voila”) there she was between the bear tracks and the thimble berries.

Sherry:  What was the inspiration for “How to Babysit a Grandpa”? How did you come  up with the idea.

Jean:  I had a friend whose father babysat her daughter (his granddaughter) once a week as part of the daycare arrangement.  I thought, “How cool is that?  Just the two of them, once a week, for what ended up being many years.”  This inspired the first kernel of an idea for a picture book story.   After a few drafts, I “flipped” the story so the child is explaining HOW to babysit a GRANDPA.  Adding this twist changed the story from another one-day-in-the-life-of story to a layered, humorous story with a “hook,” I think.

Sherry: Did it easily become a book or was it a struggle?

Jean:  I worked on the story for several years with my critique group.  I always joke that my critique group should be listed as co-authors.  In addition, at several SCBWI events, I signed up for one-on-one critiques with editors.  These were invaluable.

Sherry:  What is your favorite illustration in the book?

Jean:  How to choose . . . . how to choose. . . . I am thrilled with Lee Wildish’s vision of the story and particularly with the characters he created.  He captures the characters’ emotions and loving relationship just beautifully.  And he does it so subtly. As an non-illustrator, I am blown away. If I had to choose just one favorite illustration, it would be the double-spread, “How to Play With a Grandpa.”  The characters convey so much energy and joy.  Also, readers will, no doubt, find new aspects in the illustrations each time they re-visit the pages.  In fact, most of Lee Wildish’s illustrations invite the reader to pore over them again and again.

Sherry:  What surprised you about the illustrations?

Jean:  I did not realize I had created so many different vignettes to illustrate. By adding a few words here and there, whole new scenes or spot-art opportunities emerged. I’m totally impressed with what Lee did with these, but my first response was, “Oh dear.  I hope these weren’t a burden to him.”

Sherry:  Were there any illustrations that the illustrator brought more to the manuscript than you had envisioned?

Jean:  I could go on and on because Lee brought so much more to the manuscript with every illustration!!

First of all, overall, he did an excellent job of capturing the gentle, loving relationship between the two characters. Second, he paced the story so there are energetic spreads and then calmer, peaceful spreads.  My editor wanted to be sure that both “loud” and “quiet” children reading the book would be able to relate to the story.  Lee’s illustrations celebrate different moods and personalities, I think… Third, he added bits of his own humor and also stories within the story.   For example, when the characters go on a walk, lizards follow them home.  In all scenes after that, there’s a cat-and-mouse (lizards, in this case) chase going on.  The final art shows the cat bossing the lizards around, demanding food treats.  This was not in my manuscript, at all, but what fun! Fourth, once we saw Lee’s sketches, there were many scenes where the words were unnecessary and redundant to his illustrations.  My editor and I removed many of these words, often saying, “The illustrations should steal the show in this scene!”  A specific example is the page where the parents return.  We realized words would interrupt the emotional flow Lee created.

Sherry:  What did you learn about writing for the picture book format?

Jean:  I learned that some vignettes I’d created–which in my mind were completely different–would be fairly identical when illustrated.  For example on the spread for “How to Wake up a Grandpa,” two instructions originally were:  Make the sound of a loud, crashing thunderstorm. Sing “On Top of Ole Smokey” Even though these seem like completely different actions, as illustrations they would appear nearly the same–the child making a loud noise.  So I eliminated the thunderstorm and replaced it with tickling. The sketches also helped me realize that my order of progression for waking up someone was wrong.  Now the list ends with singing LOUDLY as the final, successful tactic.

Sherry:  Did you put any illustration notes with your manuscript?

Jean:  No I didn’t.  I wanted to stay out of the way of the illustrator so he could work his magic.  And, boy, did he!

Sherry: Thanks Jean for the wonderful answers. You can see Jean’s website at www.jeanreagan.com

Now we travel across the pond to England the home of the illustrator Lee Wildish.

Sherry: How did you come up with the character for the Grandpa and does he look like anyone in your life?

Lee:  The character was just created from scratch, no resemblance to anyone in particular. Maybe bits of people I see here and there (the funny bits).

Sherry:  Were the illustrations created digitally or did you use another medium?

Sherry:  Was it easy to come up with the illustration ideas for this book?

Lee:  A book can sometimes be challenging when you do not know your subject. But everyone has had a Grandpa at some time in their life so it’s just a case of remembering. Subject matter is always the main concern when I am illustrating, so you have to get the characters correct or the book just does not work well. The public has to see and visualize the personality of each character while keeping it commercial with a wide appeal.

Sherry:  What are you working on now?

Lee:  Yeti’s, aliens, frogs, dinosaurs and bears. I can’t really say much more than that as the books are not out yet.

Sherry: Thanks Lee for taking the time from your Yeti’s to talk to us. You can find Lee’s web site at www.leewildish.com 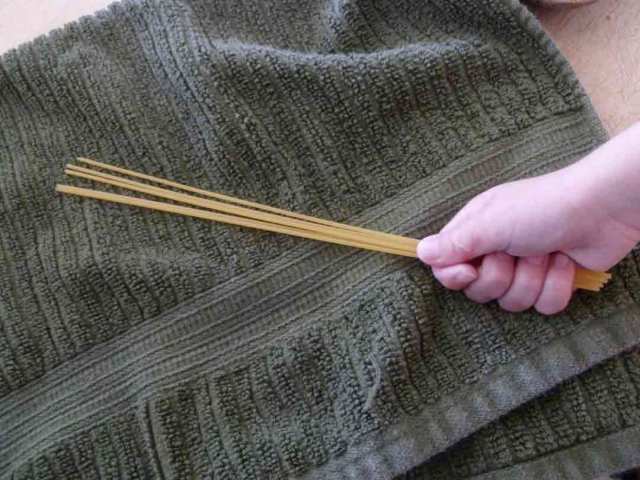 Take five strands of spaghetti and cook them in boiling water until tender.

In a separate bowl add pancake mix, an egg and milk as per the directions on the package.

Pouring the milk into the bowl. 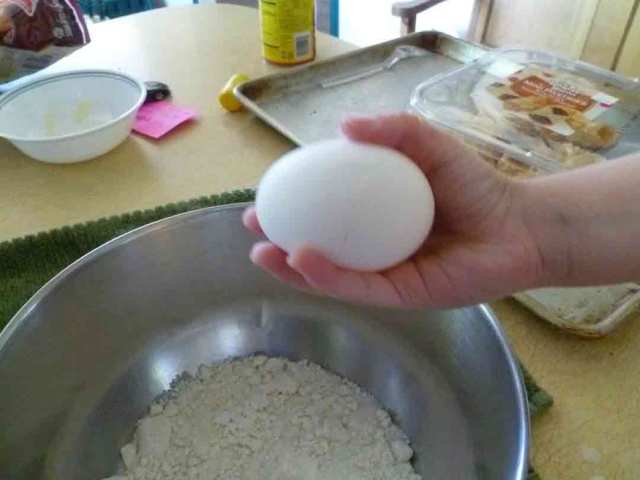 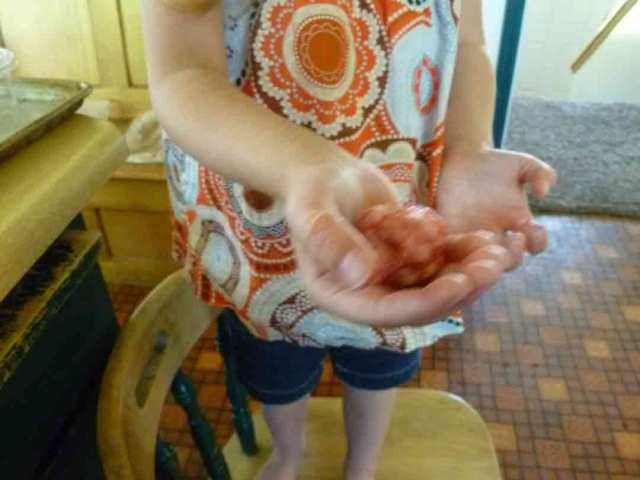 Form breakfast sausage into a ball. Have your parent get the cooked spaghetti out of the boiling water and rinse. Then ask your parent to cook the sausage ball until it is cooked thoroughly. Then you must wash your hands with soap and water.

Wash your hands carefully. There is no time to rest yet. Your parent needs to cook two pancakes, one for you and one for them. If you can handle scissors, cut the spaghetti in short strands the size of reading glasses. Go out to your garden or to your freezer and get two peas. Now you are ready to make your grandpa.

Fresh peas for the eyes 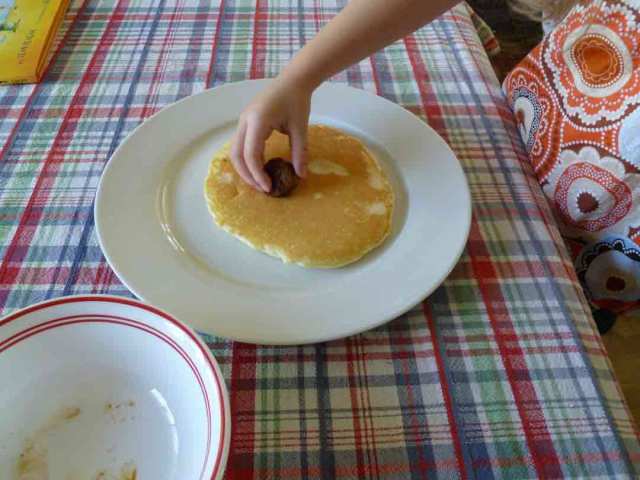 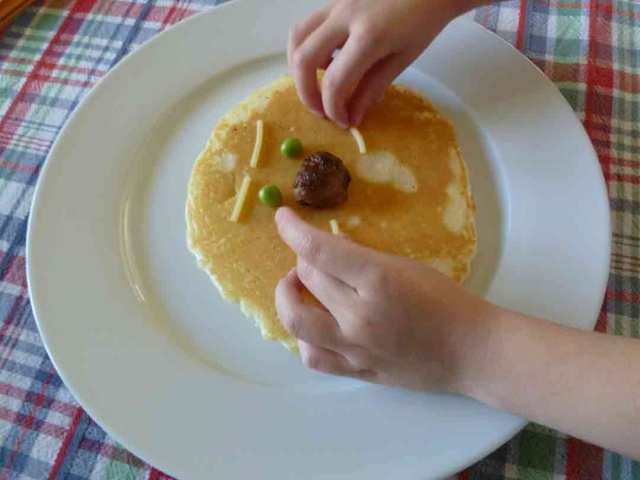 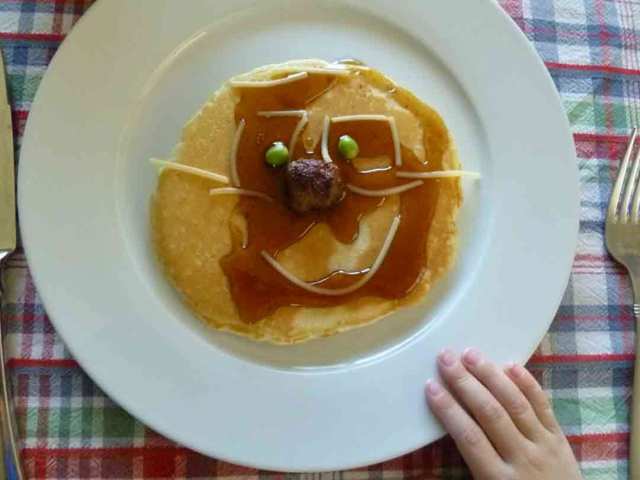 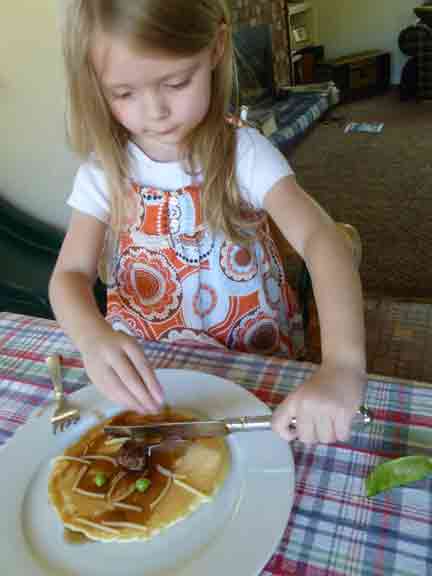